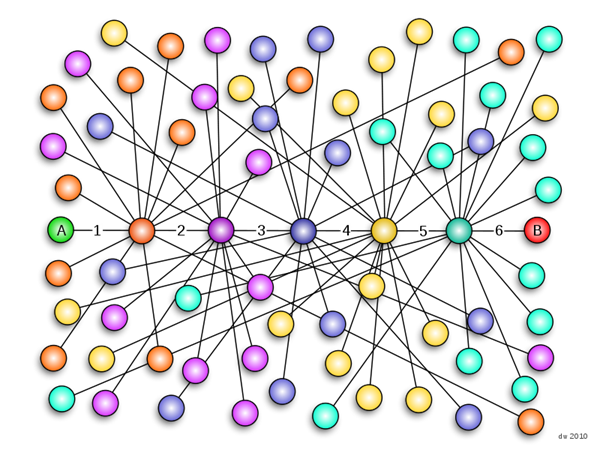 First a brief history:  In 1929 the Hungarian writer Frigyes Karinthy published in a short story called “Chains” describing how everyone on the planet is connected through their acquaintances.  Karinthy speculated that there were no more than five connections between any two people.

Throughout the 20th century, researchers tried unsuccessfully to prove the theory of six degrees of separation with formal mathematical proofs and through scientific studies.  Despite the difficulties with formal approaches, the concept continued to percolate through the scientific community.  In 1967 Stanley Milgram approached it from a social psychology perspective calling it “the small-world-problem.”   Although Milgram’s work was subsequently discounted because of his small sample size, it was intuitively appealing.  We all have met someone and discovered that we have an unexpected mutual acquaintance.   Six degrees of separation entered pop culture.

Then in 2001, with the advancement of computational social science, Duncan Watts, a professor at Columbia University, was able to recreate Milgram’s experiment on the Internet.  He enrolled 48,000 “senders” and 19 targets (in 157 countries).  His conclusion – the average number of intermediaries was indeed six.

Most recently in 2009 Nicholas Christakis, currently a professor of medicine and sociology at Yale, and his colleague James Fowler, applied social networking theory to genetics, describing how social networks function as ‘sensors’ for forecasting epidemics.  Their book, Connected: The Surprising Power of Our Social Networks and How They Shape our Lives, synthesizes published and unpublished research that investigates how social networks influence human health and behavior.  They posit that there are “three degrees of influence” — the notion that a person’s social influence diminishes beyond three contacts.

The notion of social networking is now ubiquitous.  It contributed to the philosophy of social networking that resulted in Twitter and Facebook.  It serves as the foundation of network theory used in power grid analysis, disease transmission, graph theory, corporate communication, and computer circuitry.  And it contributes to the growth of accreditation in the NP postgraduate training program world.

I had my own experience with six degrees of separation this past weekend.  I was attending a surprise birthday party for a friend.  People came together from across the US.  Several of us had known each other earlier in our careers when we were faculty in different schools within the same university.

Here’s where the six degrees of separation come in.  As I was learning about NP postgraduate training programs across the US, I discovered that I knew a Board member for one of the programs, located in a CHC in New England.  She was on my list of people to contact.  I hadn’t seen her in nearly 30 years.  Yet, here she was with her husband in someone else’s living room, at a surprise birthday celebration for a cherished mutual friend.

We updated each other about our lives.  She is a faculty member; she is writing a book; she is about to retire.  And — wait for it — she is a staunch advocate for NP postgraduate training programs, especially those affiliated with community health centers!  She described effortlessly the rewards and challenges of providing care for the under-served while training the next generation of healthcare providers.

I explained that accreditation was a necessary next step for the field.  NP postgraduate training has achieved a maturity and rigor that merits formal recognition.  As with other professional postgraduate training, national accreditation is valued as a public affirmation of quality, safety, and integrity.  Accreditation is the standard for other health professions training programs.  Program directors from across the US came together to create the Consortium, with a priority of creating a recognized process for national accreditation.  They authored the rigorous Accreditation Standards: created an accreditation process developed by program directors, for program directors.  We are designing our policies and procedures to be compliant with the US Department of Education’s eligibility requirements for recognition as an accrediting agency. The Veteran’s Affairs Health Administration has recognized our accreditation process for NP postgraduate training as the only one that currently meets their standards, and has stipulated that all established and new programs must be accredited with the next few years.

As I left the party, she said, “You do have my email, right?”  Yes, I do – and we are definitely going to continue the conversation and explore the degrees of influence in our newly discovered small world.