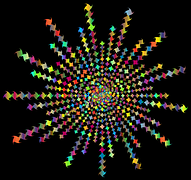 Multiple perspectives yet a single perception

This 4th of July weekend we were traveling from DC to Maryland’s Eastern Shore.  We were driving over the Chesapeake Bay Bridge (a 4.3+ mile span over the Chesapeake Bay) in the middle of a torrential/hail rainstorm. Suddenly off to the south over open waters the sun broke through the clouds. A rainbow was born. The contrast was stunning, beautiful and inspiring.  Nature’s version of daylight fireworks—black skies opened by rays of sun and arcs of red, orange, green, blue, indigo and violet.

I wonder if a similar event on a past 4th of July inspired Ella Fitzgerald when she performed her classic “Make Me Rainbows” on her album Concert Years 1994:

“Make me rainbows
Make me spring in the snow
Make me beautiful music wherever I go…
Make me some rainbows
Star-spangled rainbows
Please make those rainbows for me.”

I started to think about rainbows — how they form; what meanings have been ascribed to them. It seems that every period of history, culture, and religion have accorded special meanings to the appearance of rainbows. In Greco-Roman mythology the rainbow is the trail of a messenger from the gods. Similarly, in Norse mythology, rainbows connect the worlds of the humans and the gods. Classic Christian interpretations focus on God’s mercy and His covenant with Noah. In the Hindu religion, the rainbow is the bow of Indra, the god of thunder and lightening. For ancient South American peoples, it signified the god who ended the rainy season.

In 1672 Sir Isaac Newton invoked science to better understand and appreciate rainbows. His series of studies of prismatic colors determined that the refraction of sunlight by droplets of moisture resulted in color arcs which occur in a specific pattern: red, orange, yellow, green, blue, indigo, and violet. With a double rainbow, the colors are reversed. Skipping a few centuries, contemporary science provides further understanding of rainbows and their consistent, yet ephemeral nature. It turns out that rainbows are always, and only, visible when observed from a position of 42 degrees from the direction opposite the light source. Two people looking at the same colored arc from different positions will actually see different rainbows. Finally, rainbows actually occur in the atmosphere as full circles. What we see from our positions on Earth are portions of the circle. Astronauts have witnessed the full 360 degrees of rainbows while orbiting the Earth.

All of which brings me to accreditation. In an early posting, I talked about beauty and accreditation. Rainbows have inspired me to return to the topic.

Accreditation is accomplished by reviewing multiple perspectives of a single entity. Accreditation is driven by Standards. The Standards are constant. Yet, the data for any specific accreditation review are unique. The data are completely dependent upon the training program and its unique mission, vision, goals and objectives. There are multiple observers. Some observers have a perspective that is anchored in the program. They are stakeholders in the program, contributors to the program’s Self Study. Others, such as the site visitors, have perspectives with external anchors. They seek to confirm objectively the information in the Self Study Report, and perhaps gather additional information. Different observers, different perspectives. Yet all looking at the same program using the same Standards. Because of their different positions, each observer has slightly different perceptions of the same program. The different observations taken together represent a complete picture. Then there is the calibration of ratings and decision-making. It may not be 42 degrees opposite from the light source, but it will be specific, replicable and meaningful. Accreditation provides a 360 feedback loop – a continuous cycle of programmatic renewal, building on the past, delivering in the present, and planning for the future.

There is an elemental beauty in the process and outcome of accreditation. Accreditation is a process that highlights uniqueness while confirming adherence to constant standards of performance. Accreditation provides the public with an indication of programmatic quality that is recognized by professional peers. It symbolizes to stakeholders that they can trust that the program is fulfilling its mission.

Let’s close by listening to Israel Kamakawiwo’ole’s 1993 ukulele rendition of Somewhere Over the Rainbow.

Until next time,
Candice